I wandered into the school office one day for some reason long forgotten and I saw this little fellow asleep in a chair. It amused me how he had dropped off ‘mid-noodle’. 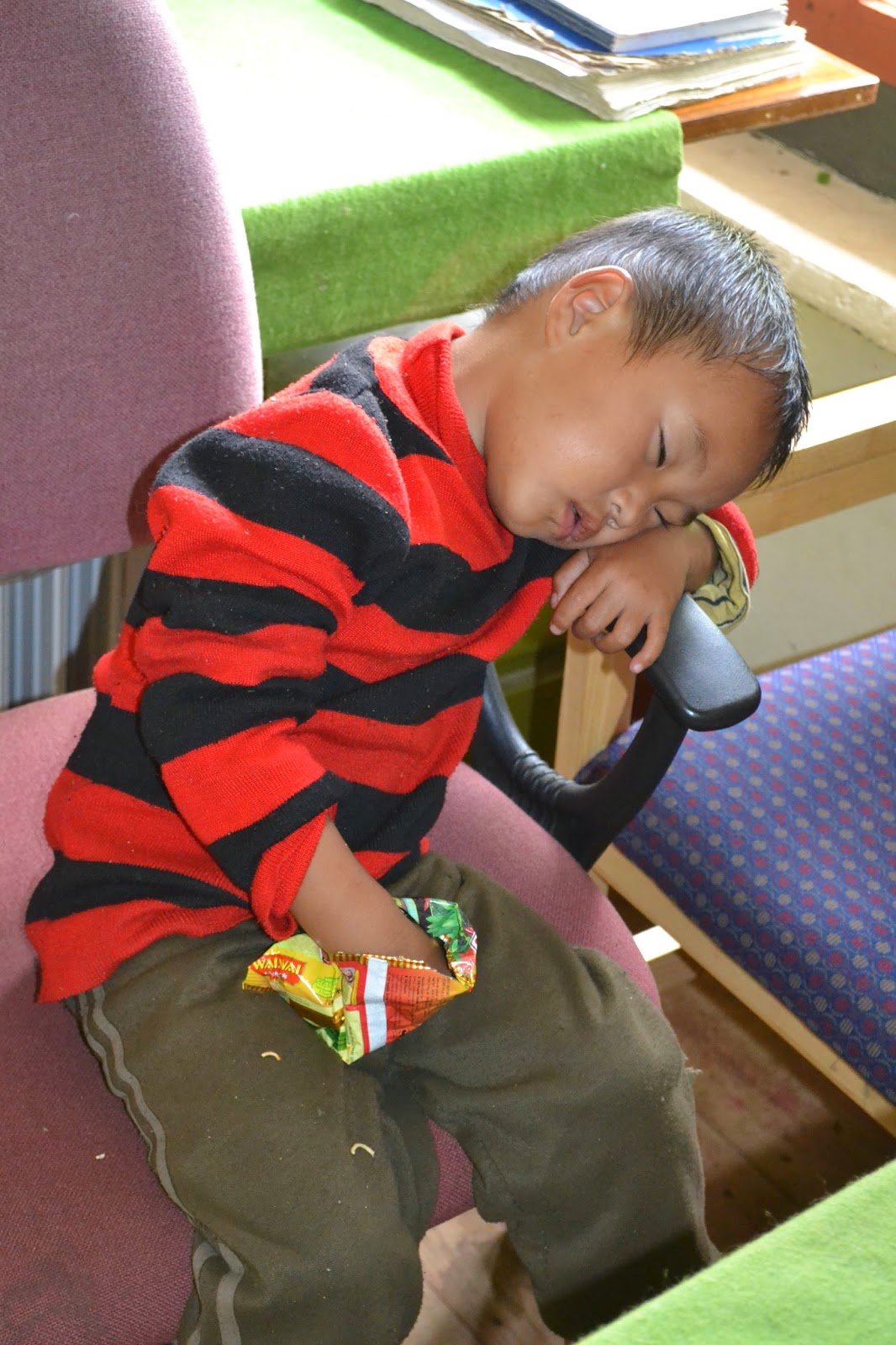 I write this blog on a Tuesday having returned to work after another day at home due to diarrhoea. Now I don’t want to go too greatly into detail but this form of the squits is not like any I’ve ever had outside of Bhutan. It begins with a belching and a bubbling (rather than a pain) in the stomach. The last time I had it, I tried to ‘tough it out’ and let it run its course without any meds. That was a bad mistake as it took me out of action for 4 days and left me several kilograms lighter (now restored).

Thus, on Monday morning, having cajoled Justine into being my substitute teacher, I headed off once more to the Basic Health Unit (B.H.U.), a clinic staffed by nurses. Now, how can I put this politely, the Bhutanese aren’t great at queuing. As an Englishman, I learnt queuing at the breast, it is in my D.N.A., it’s hardwired, it’s tattooed onto my consciousness .......er ..I think you get the picture.

So, when I arrived at the B.H.U. there didn’t seem to be anyone around except a couple of giggling high-school girls probably wondering what was wrong with me. The B.H.U. doesn’t bother with a receptionist. I walked over to the consulting room which has a curtain rather than a door and heard voices within; I also noticed an A4 sign on the wall asking patients to wait outside until the previous patient has left. Thus I waited buttock-clenched until my turn came. After a few moments a member of staff walked past and told me to go right in. I pointed to the sign on the wall and said I would wait outside until it was my turn. He just grinned in bemusement and wandered off. Next came a heavily pregnant woman accompanied by three friends. Without a glance at the sign or a pause to consider if anyone was already being seen by the nurse they just walked right into the consulting room. My English indignation manifested itself – internally of course, had any of the pregnant party spoken to me I would have been all smiles and mumbled something like, “Please, go right ahead. I’m not here for anything too serious.” All the while thinking, “Oh that’s right you just barge on in. I’ll just stand here in a puddle of my own excrement while you just swan in like you own the place.”

Fortunately none of that unpleasantness happened. The four women wandered out as quickly as they had gone in and the patient before me made her exit. The nurse (a wife of one of my colleagues) called me in. After the usual questions and the blood pressure test I was given the magic anti-biotics. I was all set to leave when a female member of staff from my school (and one of the biggest gossips) just wandered in, looked at my tablets and exclaimed, “Oh, you’ve got diarrhoea.”

Well I thought, at least everyone will know I wasn’t faking illness for a day off. Mr Paul’s ailment will be known across the school in no time. It made me ponder our Western obsession with privacy and not wishing to intrude. Frankly I didn’t care that my privacy had been invaded – I’m telling you dear reader after all. That doesn’t mean I’m ready to appear on Embarrassing Illnesses just yet but I think that in our quest for privacy we can become lonely and isolated. I quite like feeling like one of the villagers.

p.s. Diarrhoea is always one of those words that I struggle to spell correctly. When I was at school it had that strange spelling (similar to encyclopaedia) in which 2 of the letters were inexplicably stuck together. We didn’t seem to do it for many other words, how did people manage it on a typewriter? Anyway, nobody seems to do that anymore. I’ve noticed that the spelling of encyclopaedia has morphed into ‘encyclopedia.’ When did that happen? Why didn’t I get a memo? Also, have you ever noticed that there are three acceptable ways to spell yoghourt? (yogurt, yoghurt) Why is that?

More weighty issues next time!
Posted by Bhutan Clan at 22:41 No comments:

Now we’re well and truly into autumn and the temperature seems to be dropping by the day. It’s no surprise with its rich history that Bumthang is home to so many monasteries but it’s just too cold in winter for the monks to stick it out. So, rather than pay a fortune in heating bills, the monks simply up-sticks and head to warmer climes at lower elevations.

One of the benefits of working at a school on the main east-west highway is that lots of people stop by on their way through. Whenever an important Lhama or Rinpoche passes by, the school is usually tipped off and the students line up respectfully in order to get a blessing.

I took these shots a few days ago and you really get a sense of the religious devotion shown by nearly all Bhutanese. 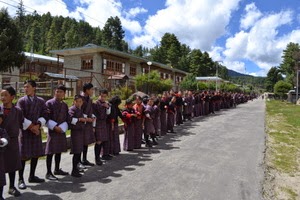 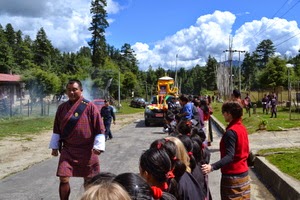 Incidentally, this time of year is said to be one of the best to visit Bhutan because the monsoon rains are ending and when the sun comes out the views are spectacular. 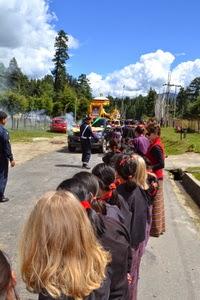 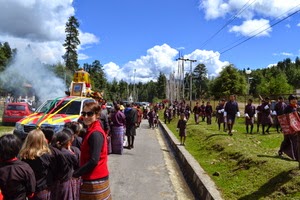 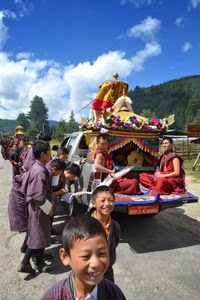 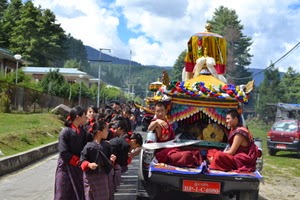 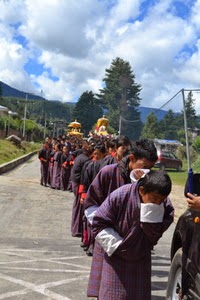 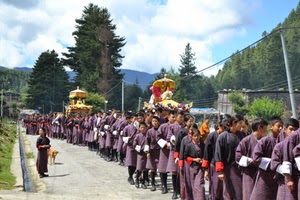 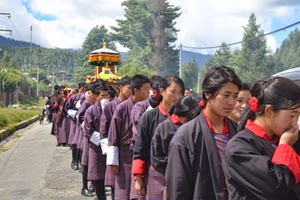 Mind you, calling it a ‘highway’ might be a bit of a stretch. I also took this horsey pic a few days ago right outside my school.

Tattoos – The Good, The Bad and the Ugly!


Mouse Tally: Still 95, Mickey is making me work hard for my century.

I’ve recently taken over running the Chumey School newspaper and this post is based on an article I wrote.

As a foreigner working in a Bhutanese school, one of the things that surprises me most is the number of students with tattoos. In the West, most tattoos are done by professionals in strictly controlled, hygienic conditions and you have to be at least 18 to get one. This is not the case here at Chumey School and from my observations, the story is similar across Bhutan.

I wanted to know why students got tattoos. Who makes them? How do they do it? Are Chumey students happy with their tattoos? Interestingly for something that is often on plain view for all to see, many students were reluctant to talk about their tattoos and nobody from Chumey School would show their face in a photo with their tattoos.

The only way I could get students to talk was if I promised anonymity and even then many would not allow me to photograph their tattoos.  One girl in Year 9 regretted her tattoo on her leg immediately after it was done because it looked so poor. The tattoo was done by a friend using an unsterilized needle and watercolour paints.

She told me, “When professionals make tattoos, they look beautiful. I wanted mine to be beautiful but it isn’t.  I regret it because now people see me as a bad company woman.”

Another girl deeply regretted the tattoos on her hands which frankly looked like mindless doodling.  She would not let me photograph them.  One boy believed that his tattoos will have disappeared in a year or two, thus allowing him to fulfil his ambition to join the army which has a ban on recruits with tattoos.

I even spoke to one girl who was so filled with regret at the tattoo on her arm that she tried to burn it off with embers from a fire. Now she has an ugly tattoo with an even uglier scar across it. Even the local technical college has now introduced a ban on students with tattoos leaving some students with very few employment options.

I’m not against tattoos done by professionals on adults. I just think it is a shame that so many children are getting these dreadful home-made ones that they almost always regret. I wrote the newspaper story to hopefully make the students ‘think before they ink.’ I hope my words will have some effect.