The mouse tally currently stands at 52! The last two little fellows led me on a merry dance; they were skilled at eating the peanut butter without setting off the trap. So I had to revert to my “track ‘em and whack ‘em,” strategy. They died in a blaze of glory behind the bin in our living room – like Butch Cassidy and the Sundance Kid. Someone should write a song about them.


This post comes a few weeks after the event but the day has played on my mind and I thought that it deserved to be recorded on the blog.


As mentioned in my bus blog, I struck up a friendship with a chap called Tenzin (there are quite a few of those in Bhutan). I got talking with him because he was talking in English to another Bhutanese man on the bus – something that I found curious to say the least.


Well, Tenzin turned out to be a very friendly chap and to cut a long story short (something I rarely do) he invited me and the rest of the Diver clan to his village (Zangme) for the local tsetchu (festival) which was held to celebrate the end of the crop sewing.

Now, the Bhutanese certainly love their festivals, these aren’t kitch shows put on for the tourists, they are by the Bhutanese for the Bhutanese, but if you’re a chillip (foreigner) you’re certainly very welcome. A holiday is often declared to allow the locals to go to the festival without bunking off school. But for Tenzin’s village festival they didn’t declare a holiday and so I couldn’t attend the main event. Instead, the Divers turned up at Zangme about 40minutes walk away from our village on the Saturday when most of the jolly japes had finished. I have to say, it is a much more beautiful village than ours and we were immediately struck by the beauty of the village temple which I’m told dates back to the 8th century. 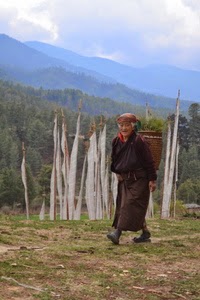 We found Tenzin celebrating the last day of the festival with an archery match. Archery is the national sport of Bhutan and the archery field is typically 110m long. That’s a long way to fire an arrow on target and I’m always amazed when anyone gets even remotely close. I’m told that in the Olympics they only fire their arrows a distance of 50metres (wimps!) Just to add to the fun, the opponents like to dance around close to the target to try and intimidate the hapless archer; it is also very common for home made hooch (known as arra) to be consumed. All in all – it’s quite dangerous and I was glad to be able to watch from a relatively safe vantage point. 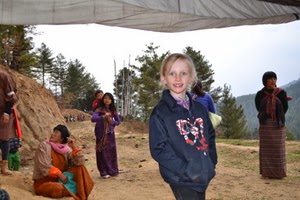 We sat with the villagers, most of whom spoke no English but they were incredibly generous and shared their food (and salty tea) with us. One rather merry (totally drunk) older lady, took quite a shine to Thomas and was very keen for him to marry her teenage daughter. Thomas who is only 9 wasn’t quite so keen and seemed more interested in having a go with a bow and arrow. 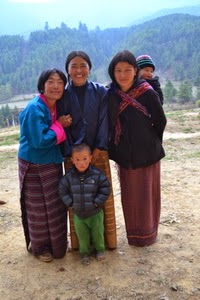 After the archery match we all proceeded to that temple that we’d been admiring earlier. These temples are places of community gathering as well as worship and so we all sat down together on the floor. Again we were plied with food and drink and I was pleased to be offered Druk beer instead of salty tea or that dodgy home-brew - arra.

Now after a good meal and a few beers, there’s nothing like a bit of dancing. Luckily, Bhutanese dancing tends to be quite slow and simple. Justine and I both have 2 left feet but we were able to pick up the dances fairly easily (at least we thought we did, although I heard the kids say something about me looking like a robot) and we had a lot of fun joining in.

Of course, no day in Bhutan would be complete without a few power black outs and the gods certainly did not disappoint us on that day. If the lights went out, nobody complained, candles were lit and we carried on regardless.

We really felt honoured to be included in such a small village festival and these are the days we will cherish when we look back on our time in Bhutan. The villagers made us so welcome and when it was time to leave, people came from all directions to shake our hands and thank us for coming. It was truly a magical day and I’m so grateful to my friend Tenzin and his brother for organising it and inviting us along.