A Fungi to be with

I’ve not seen too many of our furry friends lately but I’m still confident I’ll reach my century before Christmas.

I’ve mentioned before my regular walks through the woods every now and again to try to find the blockage in the pipe that supplies our house with water from the mountain stream. It’s one of life’s little ironies that when it rains heavily we end up with no water. Anyway, on my mountain treks I have been taking plastic containers with me and I collect berries as I go. First there were wild strawberries and then when they finished the raspberries kicked in. Now, there is also an abundance of mushrooms.  I’ve trekked with locals who cheerfully pick them and I happily pick some for them, but I’ve never been game to try eating any myself on account of not wishing to die a horrible and painful death. I do feel a bit sad about it though, I happily remember picking field mushrooms in Ireland at my cousins’ house and frying them up for breakfast. And let’s be honest, our diet is a bit limited here, some wild mushrooms could really liven things up a bit. 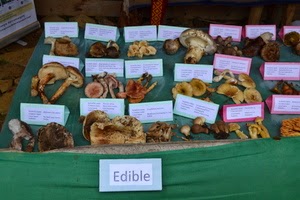 So, when a friend mentioned the mushroom festival in Ura we jumped at the chance. Ura is about 90minutes drive from our place and we’d heard it is very beautiful but even colder than chilly Chumey as it is in the highest of Bumthang’s inhabited valleys at an altitude of 3400metres.

When we got there, the first thing I noticed (apart from the chillier temperature) was the abundance of berries. There is a type of orange raspberry that grows on bushes round these parts. They’re immediately picked clean in Chumey but in Ura they were in great supply. I wished I had brought one of my plastic tubs with me.

We had been told the festival was very popular with Japanese because you can buy the Matsutake mushrooms there which are highly prized and ridiculously over-priced in Japan. Before we went inside the main festival area we took a stroll along the road to check out the toy stalls. These are a mainstay of all Bhutanese festivals and feature lots of cheap, fragile toys that might just last for a day. There always seems to be loads of boys running around with plastic guns that fire little yellow bullets.

Once inside I saw that the stalls were arranged on 3 sides of a square with the fourth side being reserved for VIPs who could watch the proceedings in comfort. Justine and the girls went ahead while I was waylaid by a Japanese TV crew who wanted to film Thomas and my friend Mark eating mushrooms. Once that was done, I found the girls had been invited into the VIP area and were happily tucking into the food that had been prepared for the honoured guests. A very distinguished looking gentleman invited me to join the gang and help myself to some food – who says there’s no such thing as a free lunch!

I took my place next to Amelie who was seated next to a fine sword that I presume belonged to the afore-mentioned distinguished gentleman. All high-ranking officials in Bhutan carry a sword as a symbol of their authority and are expected to wear it on all official business. You can also tell just how important a person is by the colour of their ‘kepney’ (scarf).  Us ordinary folk wear a white one on official occasions, if you reach a certain status (through promotion) you get one that’s white with red stripes and it goes on. Top officials wear orange whilst yellow kepneys are reserved for royalty only.

Interestingly at a mushroom festival, the lunch did not feature mushrooms. Not to worry I thought because my friend Mark told me that he’d just bumped into the landlord of the hotel we would be staying at, and he told Mark that he’d bought a big bag of mushrooms and we’d be eating them for dinner that night. The mushrooms were pretty expensive at the festival so I thought that there would be no need to buy them if I’d be eating them for dinner. Mark – who is teaching at a monastery bought some for the monks and paid Nu1000 for a kilogram. Now that’s about $20 which doesn’t sound too bad but that’s about one and a half days wages for a teacher. When my Japanese friend Mami told me that in Japan people pay up to $200 per kilo for the same mushrooms it all seemed rather relative.


Now, Ura festival isn’t in the village itself but up on the hill above. We took the opportunity to head into the village for a snoop around but unsurprisingly we discovered a ghost town as all the locals were at the festival. Even the monastery was locked up and deserted – not even a caretaker. I respectfully waited outside but my unruly children climbed over the wall and had great fun ringing the monastery bell. 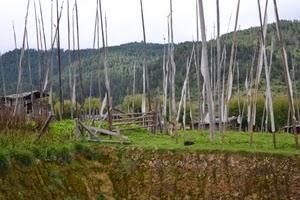 All too soon it was time to head back to Chamkhar for our night at a hotel with exotic mushrooms for dinner. But alas when we sat down for dinner we were served local river fish; there wasn’t a fungi insight. Still, the fish was delicious and they even served a few chips to go with them. A great end to another great day in Bhutan!