Mouse tally: 93, another one bit the dust

Chamkar, Jakar, Chakhar
This is our nearest town and confusingly is known by any of the above names. After our day in Ura we spent the night at a hotel in Chamkar, and in the morning decided to go and explore some of the sights on foot. Bumthang is the cultural heart of Bhutan and there are loads of historic temples and monasteries to visit.

There is a famous story you often hear in Bhutan about the Tibetan king Songsten Gampo who was about to marry a Chinese princess called Wencheng in 641. Her dowry included a priceless Buddha statue. As the statue was being moved it became stuck in the mud and nobody could move it. The princess claimed that the problem was caused by a huge demoness lying on her back (by huge I mean when she lay down she was spread across Tibet and Bhutan).

In 659 the King decided to build 108 temples in one day to subdue the demoness and at the same time convert the Tibetans to Buddhism. This raises a few questions of course:
1) Did he ever doubt his fiancée, even for a minute?
2) Why did he wait 18 years to start building the temples?
3) How did he manage to build them all in one day?
4) Is that statue still stuck in the mud?

Jampey Lhakhang
There are so many temples in Bhutan that you can start to mix them up in your memory, but this one really stands out. It is one of only a few in Bhutan that was built in that one day in 659. The temple was also visited by Guru Rinpoche (the reincarnation of Buddha) and it is said that he hid treasures in a lake beneath the temple.

In October Jampey Lhakhang plays host to a famous ‘treasure dance’ better known as the naked dance – the dancers are men only I’m afraid. It starts at midnight and (sorry ladies) no cameras are allowed.


Kurjey Lhakhang
Just a short walk from Jampey is Kurjey Lhakhang – of course it too has its own story – and it’s a good one!  In 746 the King of Bumthang was at war with a rival king called Naochhe (Big Nose). When Big Nose killed the King’s son, the King became so upset that he (curiously) desecrated the abode of the chief deity of Bumthang who took revenge by sapping the King’s life force, nearly killing him. Guru Rinpoche was invited to fix the problem and he turned himself into a Garuda to subdue the deity who had earlier turned himself into a snow lion. Not only did Guru Rinpoche save the king but he also converted all the rival kings to Buddhism and restored the country to peace. Not a bad day’s work.


That’s quite a lot of history in a relatively small space and you can easily walk from one Lhakhang to the other. Sadly, you aren’t allowed to take photographs inside the most holy parts of monasteries and temples but I was allowed to take these few shots. 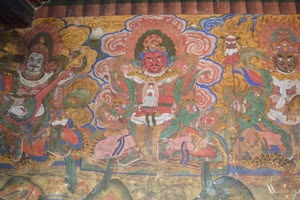 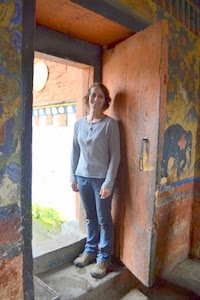 Kurjey is also home to Bhutan’s holiest water and pilgrims come from far and wide to fill up their containers. 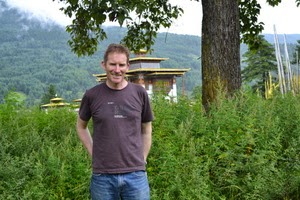 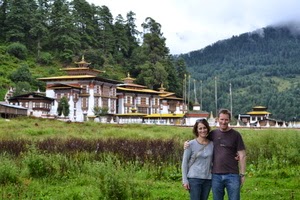