There’s a bat in mi kitchin!


Mouse Tally: 92, It’s been that way for ages now. To be fair, I haven’t seen any mice scurrying around. I’m sure they’ll be back once the weather turns cold again.

Yes, it’s curious what you find in your kitchen in Bhutan. A few days ago I went into the kitchen at about 8.30pm to make a cup of tea, there was a bat flying around. It hadn’t come in through an open door or window – none were open. No, it had come in through one of the many holes in the roof/ceiling. I thought it was quite funny but then Justine pointed out that bats carry all sorts of deadly diseases – rabies being the most well known – so we opened the front door and thankfully out it flew.

A couple of days later, I was in the kitchen again and the kids had gone out and the front door was closed but not bolted. Anyway, I heart soft footsteps and looked around and saw two monks had walked into my house. I asked, “Can I help you?” but they didn’t answer. Instead, they had a bit more of a look around, one went to open the living-room door but then seemed to change his mind. Then they simply walked out of my house. They didn’t say a word to me; in fact they didn’t seem to register my presence at all. They certainly didn’t seem the least bit embarrassed.

Incidentally, the reason the front door wasn’t locked is because in Bhutanese houses they don’t use ‘Yale’ type door locks that slam shut. Instead every door has a bracket for a bolt and a padlock on both sides. So if one person leaves the house, someone else inside has to bolt the door behind them. A bit inconvenient if you are getting up early but nobody else wants to. Also, if someone felt like it, they could simply bolt the door from the outside while you are inside your house. I’ve not heard of it happening, so that just shows what a nice bunch of people the Bhutanese are.

Staying with monks – they are everywhere in Bhutan. Our landlady who owns the block of apartments that our flat is in, just had the building blessed. It was quite a big deal, apparently 200 people came on the day of the blessing and they all had to be fed. On the night before the main blessing ceremony I had just tucked the kids up in bed when there was a knock on the door. Our neighbour told us that monks wearing scary masks and carrying burning torches wanted to come in and chase away the demons from our house. Now, luckily the kids were still awake and I was able to explain to them what was about to happen. Imagine if you were woken from your slumber to see some monstrous figure waving a burning torch in your bedroom – well, they could end up in therapy for months! 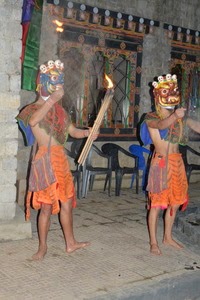 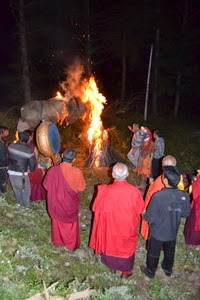 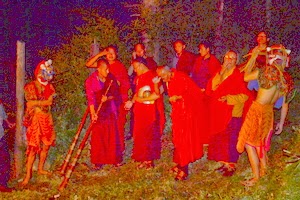