The Carnival is Over


Mouse Tally: 85 (sorry, make that 86) I’m not kidding, as I write this post, a mouse has been running around our living room and into our bedroom (why does it go in there? We don’t eat in there, there aren’t any tasty crumbs). (I use the word ‘there’ a lot don’t I!)


I felt it was mocking me with its constant forays back and forth ignoring my trap. But, the aroma of peanut butter must have become too beguiling for the little critter and it finally stuck its tiny head in the trap. When my rodent friends die at night, I leave them out on the balcony railing ready to feed to Fido in the morning. But the last time it happened I awoke to find that a creature of the night had spirited poor Mickey away. I wonder if this one will be there when I check tomorrow.

Interesting fact: This one isn’t from a guide book; it’s from my own experience. Astrology is a big deal in this country and people regularly consult astrologists before making any major decisions. Thomas has a friend called Galley. His astrologer told his mother that he must avoid travel in 2014. So, for the whole year, Galley cannot travel more than one kilometre in any direction from the school. Imagine having such a restricted life for a whole year. He told me that the same thing will happen in 2018. I told him to make sure he is living somewhere very interesting before the travel restrictions apply again.

My school Chumey MSS has just played host to a three-day ‘sports meet’. It wasn’t athletics but sports such as basketball, volleyball, badminton and – the toughest sport of all...... chess. 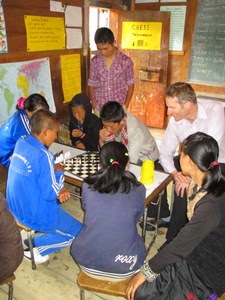 The tournament involved 7 schools from the Dzonkhag (region) and of course Chumey, as host, had lots of preparations to sort out. At a meeting to discuss what needed to be done, I said, “How about we dig up some of those large rocks in the football field as they are rather dangerous.” I was greeted by looks of bemusement but for once my crazy suggestion was accepted and a huge group of students and teachers were dispatched to the football field to remove the aforementioned rocks. Now I’m not talking little pebbles, I’m talking rocks so big that you can’t pick them up single-handedly. For some reason, this heavy-lifting was mostly left to the girl students who cleverly rolled the rocks onto sturdy sacks and carted them off with a girl at each corner.

Now, I really think that the school would benefit from investing in a wheel-barrow. In fact, despite this being an agricultural area, I have not seen one wheel-barrow yet. As usual, I digress but I’ve seen loads of workers doing back-breaking work carrying sack after sack of stones or soil on their backs and I think – why don’t they have a wheel-barrow? To be fair, I’ve seen a couple of home-made attempts and they honestly look like something from med-evil days.

On a lack of equipment note, the school has only one working pick to dig out the rocks, so progress was very slow. To cut the grass on the football field, they get the school kids to bring in sickles – another back-breaking job. I suggested that the school try to get hold of a push-lawnmower but I don’t think that will happen any time soon.

Anyway, back to the carnival. The students began arriving on the Thursday evening. Their accommodation was empty classrooms. And the escort teachers had to bunk down with the kids. Bathing was available at the ‘hostel’, 10 minutes walk away up a steep hill, I wonder if anyone bothered.

Right now it is monsoon season. It doesn’t rain all of the time – just a lot of the time. Basically, if it is sunny in the morning, it will rain in the afternoon. If it is raining in the morning, it will be sunny in the afternoon. We were lucky for most of the carnival, the rain tended to come after the close of play..... but not always. When it did rain, (and it rained heavily) the umpires carried on because who knows how long the rain will last for. If you stop and wait for it to finish, you might never get through the schedule of events.

One of my other crazy suggestions was that we put on some sort of entertainment for the athletes in the evenings, a quiz or a movie night. That idea was shot down in flames. I was told that such an activity would only lead to trouble. I tried to retort but their reasoning was so far removed from logic and common sense that I was speechless.

Moving on. I, as an all-round athlete, still in my prime was put in charge of chess. I ran a chess club every evening and lunchtime for a few weeks to select the players and give them a chance to practise. I can’t say I coached the players because they were high-school kids and they often beat me, so I didn’t really feel in any position to give them advice. It was quite a nice club to run because if there was ever a spare player, I’d have a game against them myself. Having played a few games now for the first time in a long time, I think the secret of chess is not making any dumb moves. Obviously a good player will always beat a poor player but so many times I have lost because I simply didn’t notice that someone could take my queen with their pawn or something else equally dumb.

You’d think chess would be quite a sedate affair but when a certain pair of girls had to play one another in a high-stakes game, the insults flew. I of course intervened and told them to zip it but after a few minutes it would start up again. In the end I had to sit with them the entire time simply to keep the peace. Of course, I didn’t understand a word of what they were saying to each other but I could tell it wasn’t pretty.

As I’m sure you know, one of the great joys of sports carnivals is the food. Of course, there were no sausage sizzles at this event. One of the most popular snacks was chilli chops. It is simply a large chilli dipped in a flour batter and deep fried. I wasn’t very keen to try one but after a bit of gentle coaxing I relented. Actually they weren’t bad at all. By the end of the carnival I’d eaten about half a dozen.


Justine did her bit by cooking a truck load of biscuits for the school canteen which I’m happy to say sold out quickly. We’re actually very privileged to own a small electric oven and guests always comment on it when they visit. Needless to say, we have had many people offering to buy the oven from us when we leave.

The three days seemed to fly by and there was a palpable rise in the general level of happiness at the school. Apparently there will be a ‘Monsoon Football Tournament’ at the school in a few weeks time. That should be fun.


Oh my God, I really am telling the truth, another mouse has just met its maker in the same trap only 30 minutes after the last little fellah. The tally is now officially 87. Time for bed.
Posted by Bhutan Clan at 21:00