On Monday 8 December, we headed off for the Phobjikha Valley. This is famous in Bhutan as the winter home of the Black Necked Cranes which migrate from Tibet. Justine (tour guide) organised a Bolero which is an Indian made 8 seater, off-road vehicle. Justine’s step-father Ian was particularly keen to see the cranes having recently watched a documentary on their awesome and perilous migration over the Himalayas to their winter feeding ground in Bhutan.

Justine had arranged a farm stay for a little bit of an authentic feel and we were not to be disappointed. It’s hard to guess the age of Bhutanese architecture but the 4 storey house that we stayed in was at least 100 years old. Downstairs was for storage only (potatoes) and I suspect the risk of flooding would be one reason for this. We climbed up to the living quarters via a perilous (that word again) cross between a flight of stairs and a ladder.

Our taxi took us to a rendezvous point and our host farmer met us with a tractor and trailer to carry all our bags to his home which does not even have a dirt road serving it. Of course, this was all part of the adventure for us and we enjoyed the short walk in the chilly beauty as we arrived just before dusk.

Our hosts couldn’t have been more attentive as they plied us with Arra (local moonshine) and tea. Their living room was warmed by a bukari but the windows had no glass only shutters. We could easily see the black necked cranes from the living room and their calls (like some sort of alien from Star Trek) were incredibly loud and continued on into the wee small hours.

The valley is at about 3000metres and so is a little chilly. Our host’s nephew a delightful boy called Jigme told me that it is home to thousands of bears - and leopards ate all of their chickens! There are also barking deer sambar deer, serrow (a cross between a goat and an antelope) red panda, otters and wild boar. 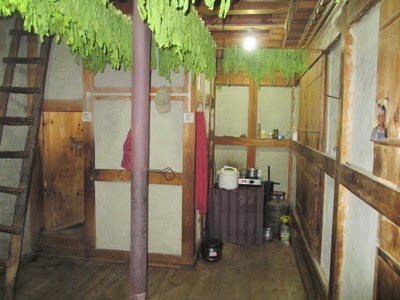 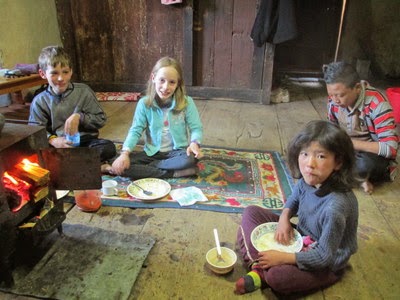 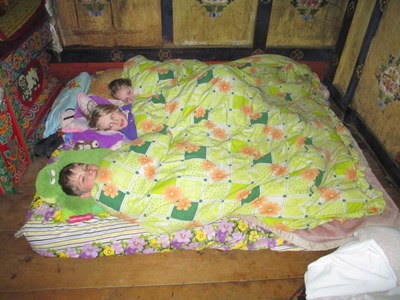 In the morning we were greeted by the loud distinctive calls of the Black Necked Cranes. Our host told us that this year there were little over 300 but in previous years there were more. One theory they posited is that leopards are taking them – the cranes are large birds that spends much of their time on the ground. So what is good news for the leopards may be bad news for the cranes. The Bhutanese tend to leave wildlife alone to sort out its own balance and the leopard is certainly not a common animal – I have met few people who claim to have seen one; so for once I will not give my two cent opinion.

What cannot be denied is the outstanding beauty of area which is a huge bowl-shaped glacial valley. I would strongly urge any visitor to Bhutan to visit the valley (crane season or not) as it is simply one of the most beautiful inland places I have ever visited. It called to mind documentaries I’ve seen on the Rift Valley in Africa and if I’d seen a zebra or a giraffe through my camera lens, I don’t think I would have been shocked.

Our farm stay already had a booking for the next night, and so we had to move to another farm stay for our second night. I was deeply moved when I learnt that the mother's first son was recognised as a reincarnation of a lama and taken away at the age of three years. This would be considered a tremendous honour but to effectively have one's child taken away from you would be unbearable.I recently read a book called ‘Tibet Tibet’ by Patrick French in which I learnt that lamas often make prophecies about where their next incarnation will be found. When a child is thought to be a possible reincarnation, monks visit the child with belongings of the deceased lama plus a few red herrings. They then see if the child recognises the items and can recall using them in his former life. If he does, then they consider the evidence before declaring him to be the true reincarnation. 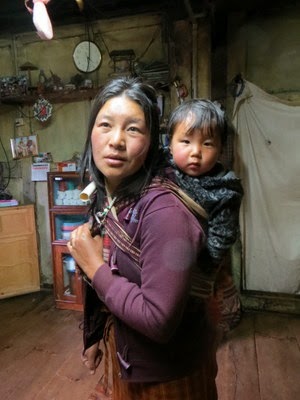 Now, not surprisingly this can lead to disputes, and in the past there have often been rival claims to the reincarnation of a particularly eminent lama. This has led to the acceptance of up to 3 reincarnations of one lama (mind, skin and spirit). I’m not sure if this is a genuine belief or a clever compromise but from what I have seen, Buddhism is a truly tolerant and peaceful religion/philosophy, and so I admire it for adapting rather than being mired in outdated dogma, unlike some other religions I shan’t mention.

The next morning we awoke to a frosty, winter wonderland. It had dropped to minus 4 degrees Celsius overnight – nothing too extreme but enough to make the valley look a very different place for a few hours until, by 9am, the frost had almost all disappeared. 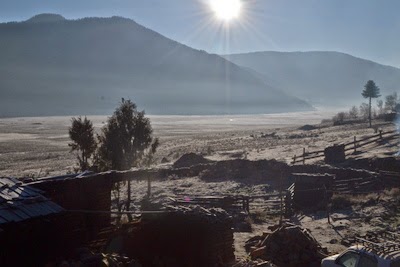 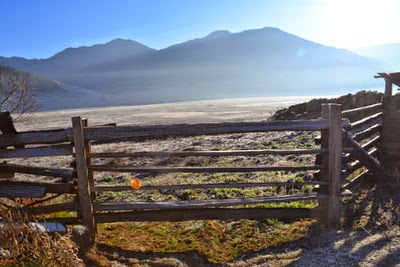 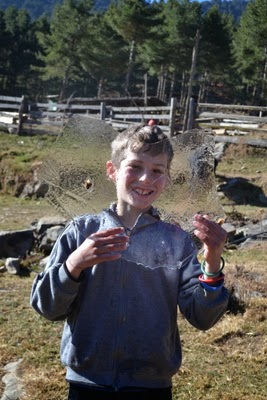 After two days of farm stay we were ready to stay in a resort for a night, if nothing else than to have a hot shower. As a volunteer living in Bhutan for a year I know that I was involved in the lives of local people and altered them in some way – hopefully for the better. I regularly saw tourist vehicles whizzing past my school and I couldn’t help but wonder if they got a sense of the true Bhutan or just lived in a tourist bubble for 2 weeks. If anyone reading this is considering visiting Bhutan, I would strongly urge you to do some farm stay rather than simply stay at western style resorts for the entire duration. It may take you out of your comfort zone for a day or two but I am certain that they will be the memories that will endure.