I can make you a millionaire!

The mouse count currently stands at 41 which is only 2 more since I last wrote. I think the mice are becoming wise to the peanut butter. Also, the peanut butter in the trap is quite old now and may not be very tasty any more. You may ask why don’t I just buy some more, but the peanut butter shop is a 45 minute taxi ride away and I haven’t been paid yet. Yes, I am a volunteer but they do pay me the local pay rate (approx 12 Dollars a day). There are huge costs in coming to Bhutan with a family of 5 (flights, visas, insurance, vaccinations, setting up home for a year) – 12 dollars a day would not even pay for the vaccinations (approx 1000 dollars per person). But, as usual – I digress. Today’s blog is all about food.

Yes, the diet industry is worth billions and we all know that most diets simply don’t work. Its human nature, we’re good for a few days and then we walk past the kebab shop, take one whiff of that greasy goodness and suddenly we’re munching on God-knows-what, and all our self-sacrifice has come to nought.

So, I’m going to share my 100% guaranteed to work diet with you. You can write an (admittedly short) book all about it and become rich beyond your dreams. So what is the secret to guaranteed, exercise and drug-free weight loss?

Simple – move to Bhutan. I was approx 85 kilos when I arrived here. When I recently returned to England, I was 78kilos. I haven’t been that weight since my early 20’s. So, what exactly is the secret? Well, it’s quite simple; there are no burger bars, chip shops or KFCs. In fact, there aren’t any chain stores in all of Bhutan. There aren’t really any supermarkets here either. The capital has a couple of slightly larger shops but they are far from being supermarkets. So the reason for my weight loss is really very simple, there is hardly any junk food to eat.

Our diet
In Australia, I ate meat almost every day. In Bhutan we only eat meat at the weekends and that tends to be a very small portion. I imagine many westerners living in Bhutan would quickly become vegetarians after their first visit to the butcher’s shop. There is very little thought given to hygiene, the premises looks more like an abattoir than a shop. You can’t buy a particular cut of beef, you simply buy ‘beef’. This beef is very fatty chuck steak that must be stewed for a long time before it is tender enough to eat.

Though I love pork, I simply wouldn’t risk buying it in such unhygienic conditions and again it is extremely fatty. Bhutanese people have a very different taste to most westerners. In the West, we have been told that fat is the devil and it should be avoided at all costs. Here, I think the traditional view of fat as ‘a good source of energy’ or ‘a good way of keeping the cold out’ still holds sway. Interestingly, I’m told that all the meat comes from India, as Bhutan is predominantly a Buddhist country they don’t ‘really’ approve of taking the life of an animal. Of course, people (including monks) can eat the animals once butchered but that’s a different story.

As for chicken, you can buy a whole chicken that’s it. There are no breast fillets to stick in the stir fry. In fact, meat is routinely served with all the bones still in it and you must chew carefully and try to dispose of the bones in as polite a manner as possible.

As in many parts of India, it is very common for Bhutanese people to eat with their fingers. When cutlery is provided it is usually a spoon or a fork. When I recently asked for a knife to tackle a large piece of gristly meat at a friend’s house, there was much discussion before someone disappeared and eventually came back with said instrument. When we discussed it, my host said, we just use our teeth to chew through it – we never bother with knives.

Sweet versus salty
Bhutanese people delight in telling me that western food is very sweet whereas Bhutanese food is very salty. I agree with them to a point, I think a lot of western savoury food does contain unnecessary sugar and sweet things are often too sweet. However, they become very defensive when I point out that Bhutanese bread is incredibly sweet – you cannot get it without loads of sugar. Also, as a tea lover, Bhutan is a very challenging country for me. There are 2 sorts of tea: the first is ready made with milk and sugar. When I ask for black tea with no sugar they say, “Coffee?”
I say, “No, tea with no milk or sugar.” This is so strange that they always whisper something about coffee to someone in the kitchen and moments later I am presented with a cup of instant. The other type of tea is known as ‘suja’ or ‘butter tea’. It is often drunk at religious occasions and many Bhutanese like to drink it for breakfast. As the name suggests, it is tea which contains milk, butter and salt. They have been drinking it for centuries and it is very much part of the culture. I was recently at a formal meeting to congratulate the local education officer on his promotion to ‘dasho’.
He asked me, “What do you think of Bhutanese food?”
“Well Sir,” I replied. “I don’t really enjoy Suja.”
Seconds later an attendant silently proffered me a cup which I could not refuse. The Dasho laughed heartily and commented that a chillip (foreign) friend of his told him that Suja was by far the worst tea in the world. I’m glad he wasn’t offended, many people are though and I’ve found that it is often easier to take a small cup and try and pour it away discreetly rather than simply refusing it.

In season
In the west, we are used to eating our favourite fruits and vegetables throughout the year. In Australia an apple hardly seems like a seasonal fruit at all. Shortly after arriving in Bhutan, I purchased a few apples and realised that I had paid $5 for a kilo. They later went up to $6 a kilo. That may not sound too excessive but that is half a day’s pay. Imagine working all day for only 2 kilos of apples! I cannot imagine who in Bhutan can afford them at that price.

Some like it hot
Of course, I cannot write a post about Bhutanese food without mentioning chilli. I don’t know when the chilli arrived in Bhutan but it is very much part of the culture. They are eaten as a vegetable rather than as a condiment and so most dishes are best described as ‘fiery’. I like a bit of chilli myself but I literally could not stomach the amount of chillies a typical Bhutanese eats. Our kids would always complain if I put the slightest hint of chilli in our food back in Australia. Now they are so used to it that they even sprinkle it on popcorn. 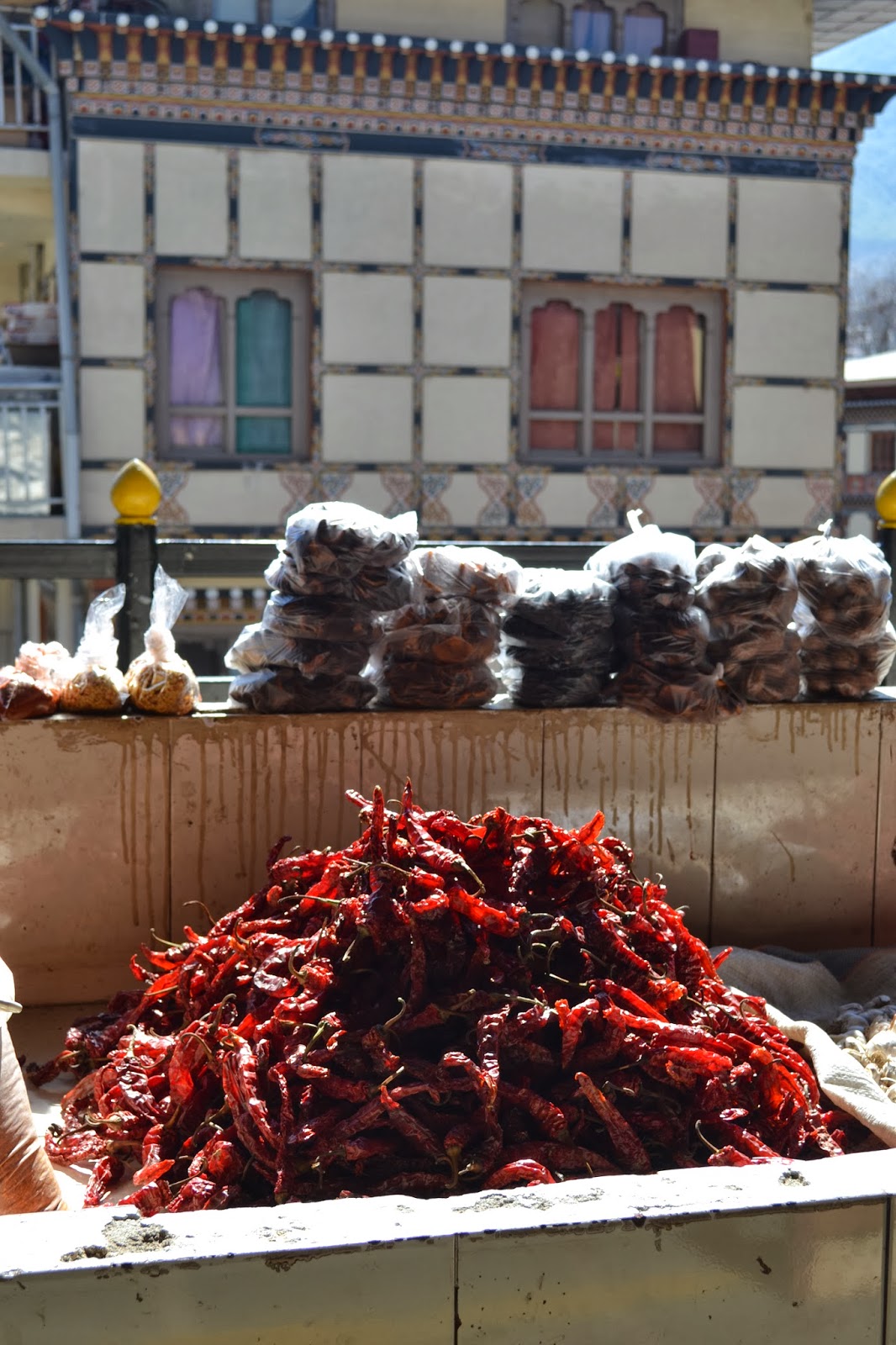 Rice, Rice and more rice
The Bhutanese love their rice and a typical meal contains about 3 times the amount of rice I would normally eat. Many eat rice with just about every meal - it makes sense, it is cheap, it grows locally and it fills you up. I’m not sure how healthy the diet is and I feel so sorry for the boarding students at the school who are served almost identical meals day after day.

Many teachers complain about the growing popularity of junk food with the students. The boarders often sneak over to one of the local general shops and buy Coke or packet noodles (eaten dry). Frankly, the teachers have barely seen the tip of the ice-berg and I think they would be shocked to see the abundance of junk food in the West. Very few students in Bhutan are overweight – sadly the same can no longer be said about their western counterparts.

Justine came across these photos recently on another blog and they really do make you stop and think. Just compare the American diet with the Bhutanese one. It may be a bit ‘samey’ but how much healthier is it? Also, Bhutanese farmers rarely use pesticides so the typical Bhutanese diet is also organic and of course uses a lot less packaging.

I have virtually no will power when it comes to food and I love all the stuff that is bad for me. But I hope when I return to the west that I bring some of my Bhutanese ways with me – I think I’ll feel a lot healthier if I do.