Mouse count still 100 - must put some more peanut butter in the traps.

A few weeks ago the nearby primary school – Zungye, had a picnic and they invited the teachers from Chumey School. No sooner had I arrived than I was introduced to a kindergarten boy named Jigme. I was really struck by his confidence and excellent English. He told me that his father was a lama (senior monk). I was surprised as I thought all Buddhist monks took a vow of celibacy (apart from lay monks). Well, it turns out that most do but a rare few are allowed to marry. I’m not sure how they are granted this privilege but I’m told that the monk can only marry every second re-incarnation, thus in his next life he’ll lead a more traditional monk’s life.

It was only when Jigme’s father arrived and everyone queued up for a blessing that I realised how important the lama (known as a Rimpoche) must be. I was pleased to note that he wore a wide brimmed hat like us foreigners – most Bhutanese rarely wear hats except for a few farmers who still wear the traditional woven conical hat which is quite different to the ones worn by Chinese or Vietnamese farmers.

I was particularly impressed by the teachers at Zungye who took the time to entertain the children with vast ‘ring-o-roses’ type games, rather than just sit and leave the students to their own devices. It was a great day and the food was very tasty indeed. Just before we left one of the teachers (Pema Choki) came up to us and warmly thanked us for coming.
A couple of weeks later, we received an invitation to dinner at Pema Choki’s house along with a fellow Chumey teacher whose husband also teaches at Zungye. It was only then that we heard that the Rimpoche is the uncle of Her Majesty The Queen. We were understandably a little nervous and wondered what sort of protocol we would have to follow. Would I have to wear a gho? Bow, prostrate? As it turned out, the Rimpoche was travelling and we were told that our casual clothes would be just fine. 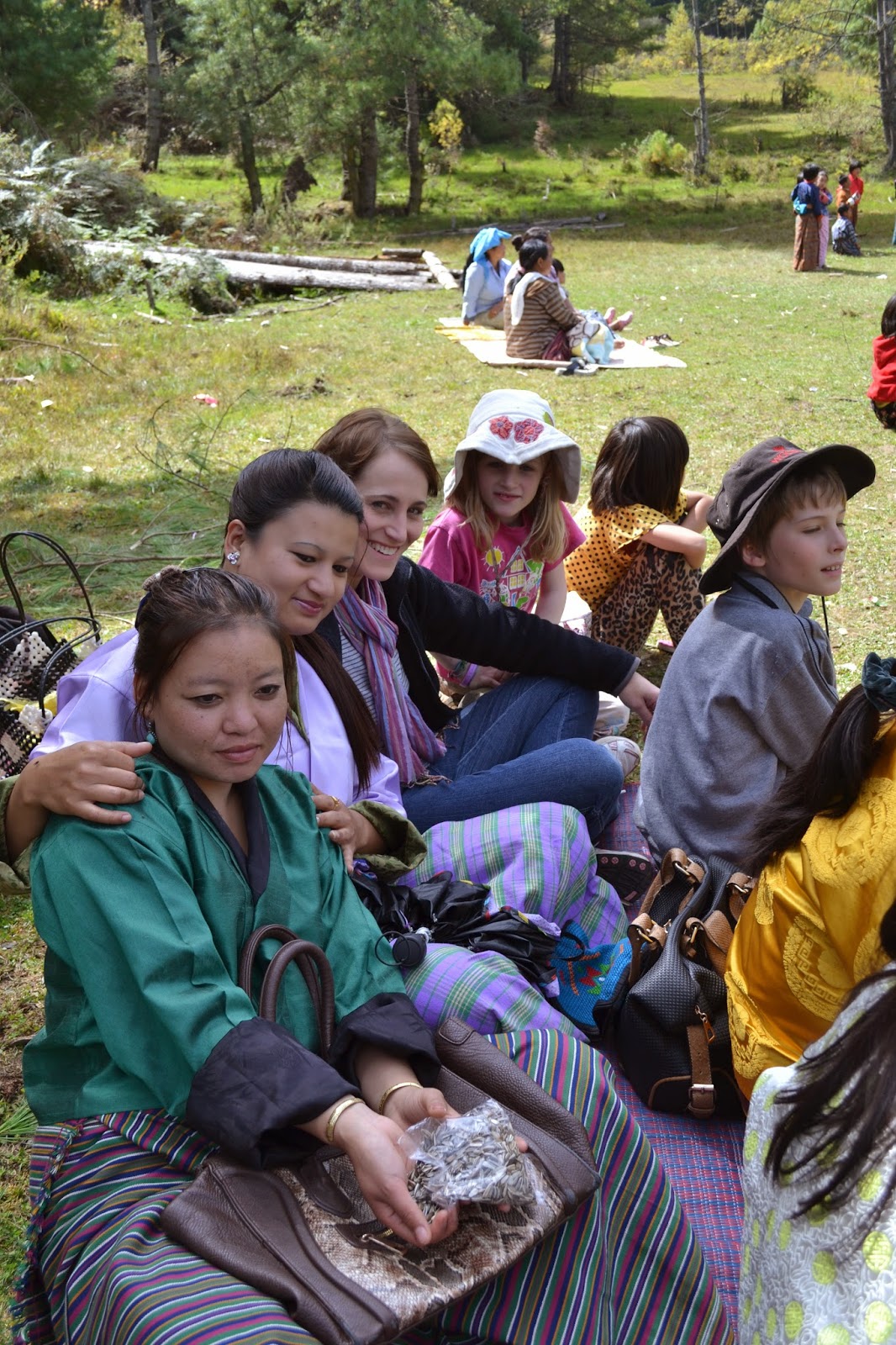 Our hostess Pema Choki was just one of those people who makes you feel so incredibly relaxed in their beautiful home and was just so warm and friendly. Once again the food was delicious and in addition to the regular Bhutanese beer, there were several cans of German Beer (Bittburger). I was astonished to see such nice beer, I’d never seen it in any of the shops and Pema Choki kept urging me to have another one telling me that they were left over from the Royal Wedding.

Wow. I really did feel privileged. That is one of the wonderful things about Bhutan. You often meet people quite high up the social ladder and they are always very friendly and charming. In my time here, I’ve met several senior politicians including the Speaker of the House and they are always delightful. I recall that (shortly after my father died) I was having dinner with Nancy and friends. After the guests had left, I turned on the news and one of them was there being interviewed.

Now, of course the Diver’s can’t go to a fancy shin-dig like that without embarrassing ourselves just a little. Lois (usually the last to crash at a party) seemed a bit out of sorts and to cut a long story short, ended up vomiting on the floor. Thankfully, she missed the rugs and it wasn’t such a job for me to wipe up the mess with paper napkins. It was a fantastic night and a memory the Divers (Lois excepted) shall treasure.
Posted by Bhutan Clan at 22:33