Mouse count: 102, things definitely slowed down in recent months but I’m expecting a bit of an upturn now that it’s cooling down again.

Naked Dancing!!!!
Well, I bet that got your attention. (I wonder how many hits this post will get). It’s a nice time to be in Bhutan right now. The monsoon rains finished a few weeks ago and it won’t rain now until next summer. We’re left with deep blue skies and some of the most amazingly fluffy clouds I’ve ever seen. Now that the rain has stopped, the festivals have started up again and of course the tourists have returned. Curiously, most of the tourists I’ve met seem to come from Switzerland – I guess they’re here just to see if Bhutan really does look like their home country; by all accounts it does.

Well I thought you might enjoy some of the pictures I took at the local tsechus (festivals). Some are from Jakar which is our local big town and the administrative capital of Bumthang. This tsechu took place inside the dzong. The dzongs are ancient fortresses renovated and rebuilt throughout the ages having survived wars and earthquakes. They are still used for local government and also as monasteries. This tsechu was very crowded and there was little room for manoeuvre, so I’m quite pleased with the photos I took. They just seem to me to be a riot of colour, and the audience (all wearing ghos and kiras) is as colourful as the performers. 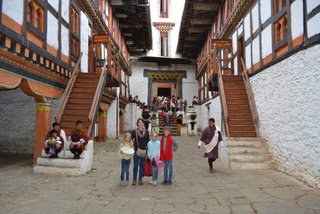 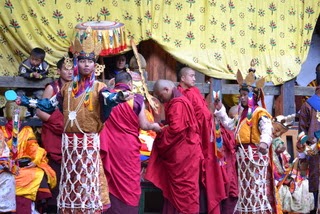 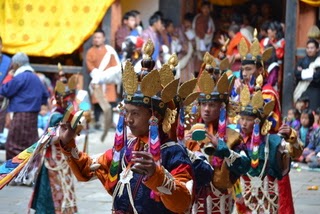 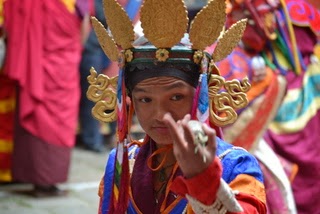 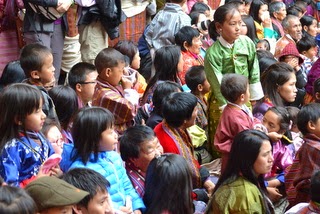 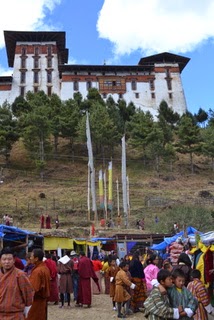 The other set of pictures are from our local tsetchu at Thakkar. This was a much more leisurely affair and we were able to sit and have a picnic whilst watching the masked dancing. Masked dancing is a mainstay of Bhutanese tsechus. There’s always a ‘joker’ character called Atsara who amuses the crowd brandishing a wooden phallus. They seem to take great delight in embarrassing female foreigners who almost invariably shriek and cower as he waves his wooden willy. I’m told that the phallus symbolises the accomplishment of wisdom by the dubthops (saintly beings) who once roamed the universe banishing evil by mocking worldly things.
Well, as the photos show, when Atsara started pointing Percy at Amelie and Lois; far from being intimidated, they just stood there having a right old giggle. I was very proud of them as I watched from a distance and I couldn’t help wondering if poor old Atsara felt he had met his match. 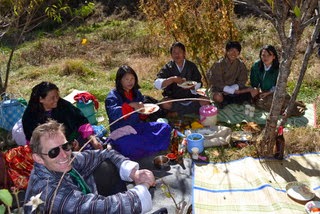 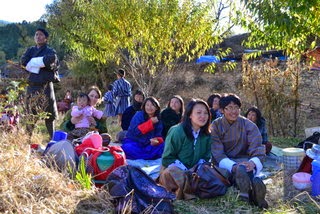 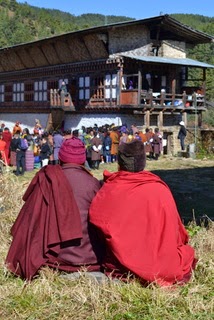 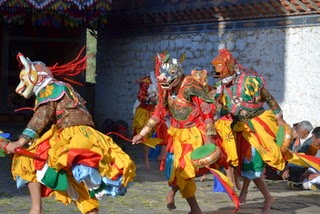 So what about the naked dancing? (I hear you ask). Well, last Wednesday (it was a full moon) Justine, Sarah (a Canadian teacher based in Trongsa) and yours truly headed off to Jambay Lakhang which you may remember from an earlier blog is one of the 107 monasteries built in one day to subdue a huge demoness.

Now, here I must disappoint a few readers. Firstly, the naked dancers were all male and secondly, cameras were strictly forbidden. Having secured the services of a couple of baby sitters, the Divers were all set to paint the town red. This is a famous and very popular tsechu. Upon our arrival, the first thing we saw was a huge fire suspended on a frame. Brave members of the crowd were encouraged to walk underneath to receive a blessing. We were warned to avoid wearing any nylon type fabrics that may be flammable. We sensibly (though perhaps boringly) waited until the burning bushes had fallen to the ground and we could walk under the frame in relative safety.

That was about 9pm and the naked dancing wasn’t until 1am. It was also by far the coldest night so far of autumn; the ice on car windows clearly indicated that the temperature had dropped below zero. We wisely headed off in search of a warm tent and found a very pleasant ‘soft drink’ tent with a bukari (wooden stove) to keep us all nice and warm. Of course they also served beer but asked us to hide the bottles underneath the table in case a police officer came by. By and by, a police officer did come by and happily sat down close to the bukari and didn’t seem to care one jot about the fact that everyone inside was drinking beer.  It was only us chillips (foreigners) who were still bothering to try and hide our bottles.
As usual, we met loads of fun, friendly people and a small crowd of Bhutanese were soon buying us drinks. When we bought them some beer in return, they promptly heated it up to boiling  point on the bukari and insisted we try it (it was as awful as it sounds) and we politely declined their further offers of hot beer.

When 1am approached, we headed over to the site of the naked dancing. There was a large bonfire (well you’d want a bit of heat if you were dancing naked in sub-zero temperatures) and a very large crowd. The dancers appeared with their heads covered (but nothing else). Now, anyone expecting a cleverly choreographed, highly rehearsed routine would have been very disappointed. To my (admittedly untrained) eye, it looked like a bunch of naked guys who had just met, were jumping around a fire in a bid to keep warm; but hey what do I know!  I’m told that it is a deeply religious dance that dates back centuries. My principal told me that when one year they didn’t perform the naked dance, the village had all sorts of bad luck and harvests were very poor.

Once the dancing commenced, the crowd surged forward and security had to brandish burning logs to get the crowd to behave in a more orderly manner. Once everyone had calmed down the dancing resumed and everyone seemed to be satisfied with the performance. Our friend and colleague Sarah, who had travelled all the way from the other side of Trongsa seemed very pleased with the performance but kept talking about hair for some reason. I’ve no idea why, I mean, their heads were completely covered!
Posted by Bhutan Clan at 22:38