We were away for 5 days in Thimphu for another one of my regular visits to the eye doctor. Upon our return we noticed several of our little friends scurrying around and suspicious holes in several food packages. Luckily we had stocked up on peanut butter in the capital and so I wasted no time in baiting the traps. We caught 5 mice in 24 hours. Fido must think Christmas has come early. (I know you think he must be a Buddhist dog but he assures me he is multi-denominational.)

There are only two terms in the school year in Bhutan. Right now we are coming towards the end of Term 1. It is exam time and all students (including kindergarten) must sit an exam for each subject. The school has a very strict policy on exams and students cannot even sit an exam unless they have an attendance rate of at least 90%. Perhaps this is why my class attendance is so good (all students were eligible to sit the tests). There is very little absence at all; it is rare for even one student to be away.  The same cannot be said for the classes I have taught back home where some students have very poor attendance indeed and many parents keep children home on their birthdays. 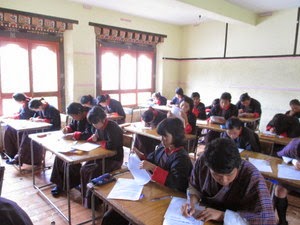 Now, frankly, I do like some elements of this. Some students back home simply aren’t motivated to study hard because there are no consequences for failure. If a child doesn’t do his homework, it is very hard to discipline them. Now, I know there are all sorts of studies about how homework is a bad idea. I don’t believe in piling on the homework but I do think it has some merit, and things such as learning times tables or practising telling time are ideal activities to practise at home rather than having endless drills in class time.

Of course, there is a very real down-side to this policy, and that is - some kids simply cannot pass the tests even though they work hard. When you first come to teach in Bhutan you wonder why some kids are so much older looking than others in their class - the answer is simple - they are so much older! In Class 5, where most students are aged 10 or 11 years, there are two boys who are 16 years old. When I discuss this with my colleagues, I say, What about the damage to their self esteem? Don’t you think they feel embarrassed sitting in a class with children so much younger than themselves? I’m invariably greeted by blank looks. They in turn are bemused by the Australian system. Many teachers I have spoken to have asked me if my children will have to repeat the grades they have missed in Australia through being in Bhutan. I point out that we are actually home-schooling them, and they seem to be doing quite well – there would be no point whatsoever in making them repeat the year.

I know I shouldn’t brag but Amelie (grade 2) has just finished reading the last of the Harry Potter books, and yes she does understand them.  I know this because she won’t stop talking about them – she’s even learnt most of the words to the Sorting Hat song from book 7: The Deathly Hallows. She also took a Harry Potter quiz on her Kindle and got only one question wrong.  Whoops! Digressing again!

On one of my earlier trips to Thimphu, I got talking to a young man in the barber’s. He (rather forwardly) asked me how old I am. I told him, (but not you dear reader) and in response, I asked him the same question. He told me he was 24; so I asked him what he does for a living. He answered that he was still at school in grade 12. Imagine still being at school at the age of 24! One of the young teachers I have become quite pally with told me that when he began teaching, several of his students were older than him.

So basically, I think that the Bhutanese system is much too strict and students with learning difficulties should move to the next grade along with their peers, rather than suffer the indignity of being the only kid in primary school with stubble. In the West, teachers have to juggle the needs of all sorts of different learners; I’ve taught kids with autism, Aspergers syndrome, Down’s syndrome, cerebral palsy, ADHD and all sorts of undiagnosed behaviour disorders. I’m not pretending it’s easy - it isn’t. But the alternative, to exclude difficult-to-teach kids, leaves them marginalised and left-behind.
Posted by Bhutan Clan at 22:45