Mouse tally 53 (possibly 54) during my absence from the Diver household (see below) a mouse was caught in a trap but unfortunately it didn’t die straight away. Had I been at home, I would have put poor Mickey out of his misery with the help of a handy piece of firewood.  Justine’s a little more squeamish and so instead she simply threw the poor rodent off the balcony reasoning that the 10metre drop would finish him off. Apparently it didn’t....Mickey scampered off and his fate remains unknown. Let’s just say the tally is 53!

It’s a common complaint in Australian schools that things are so often arranged “at the last minute.” Well, teachers have a lot on their plates and so it’s no wonder that things aren’t always arranged 2 weeks in advance.  I’d like to share with you now the details of yesterday’s big school event.

As regular readers will know, Chumey School has had quite a lot of misfortune this year. Two female students have died, one from an unspecified illness, the other fell from a moving vehicle. A meeting was held shortly after Pema Choki fell from the goods vehicle. The one item on the agendum was that the school is experiencing bad luck because of bad spirits. Therefore we need to get in a senior lama to bless the school and essentially exorcise the bad spirits. (We’d actually had a whole host of monks perform an all-day blessing ritual only a few weeks ago.)

Yesterday the principal went to visit the lama to arrange a suitable date for him to visit the school and perform his rituals. The lama said that he would come at 5.30pm that same day. Notes were hurriedly issued (it was actually the first time I have seen any notes go home to parents – most of the time messages are conveyed verbally by the students). 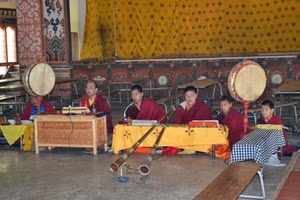 Now, school doesn’t finish until 4pm and many of the day students have a very long walk home indeed. Needless to say, they didn’t walk home, only to walk straight back to school again – so they simply stayed at school.

At 5.30pm the lama arrived and was promptly whisked away by a few select staff and taken around to every room in the school so that he could perform his blessings. Meanwhile, the students waited in the school hall...........and waited..............and waited. I took Thomas along, thinking that he would enjoy this cultural event. I had a pleasant time talking to the other teachers, discussing salaries, lack of resources and of course....who we fancy for the World Cup. Meanwhile the rain fell unrelentingly and the night grew darker and darker.

The school grounds are quite vast and so nobody in my group had any notion where the lama was or how long he would take. It was only when I broke from my discussion with my colleagues that I noticed Thomas was sitting on the wet grass. When I admonished him for his foolish behaviour, he retorted, “But I’m tired!” It was only then that I glanced at my watch and realised that we had been standing around, sheltering from the rain for more than 3 hours. At least we teachers were having a pleasant time chatting about important issues of the day. The poor students were still in the hall and were now been made to perform religious chants.

I therefore made the executive decision to go home and get poor, soggy Thomas a quick dinner and into bed. I wondered what time the whole ceremony would actually finish. Would it still be going at 9 o’clock? Surely not! As I left, I saw one student I know well from the nearby village of Umsang. I begged her to stay at a friend’s house rather than walk home along a mountain track in the rain and dark with no torch to light her way.

The next day, I discovered that the ceremony didn’t finish until around 11pm. Please bear in mind that the poor students had to sit in the hall, chanting until then. (Did I mention that there was no food served either?) This wasn’t just the senior students, there were many students there from the primary grades. And of course, when I saw that same student the following day, she told me that she did indeed walk home in the dark and rain with no torch to light her way. They’re made of tough stuff those Bhutanese kids!  So how’s that for some last minute organisation!

P.S. Not one student was absent from my class the next day.
Posted by Bhutan Clan at 22:01