The mouse tally currently stands at 54. I’ve blocked up one of their favourite hidey holes with duct tape so I’m not sure where to leave the traps now. Whilst making dinner tonight I heard a rustling on the shelf where we store our pasta. I carefully removed several jars so that they wouldn’t be broken in the impending fracas. I stood, brandishing a piece of pine, ready to strike. I could feel my heart beating as I removed the last packet of pasta spirals knowing Mickey was lurking in the corner. But in a death-defying move, he leapt straight at me, catching me off guard. I swung my stick in vain but Mickey landed safely and ran to cover. It was only as I searched for him afterwards that I discovered one of his friends in the kitchen mouse trap. Oh well, swings and roundabouts!

Bhutan has 2 main sources of income, the second most important is tourism. Anyone wishing to visit Bhutan must come on an organised tour and pay approx $250 per day. This fee does include your accommodation, guide, transport and meals – so it’s not as expensive as it first seems.

However, Bhutan’s primary source of income is as a supplier of electricity to their power-hungry neighbour India. Of course, the power comes from hyrdo-electric generators that take advantage of Bhutan’s ubiquitous mountains and rivers. Interestingly, they don’t build huge dams which flood the valley like in other countries; instead they fit turbines that are turned by the river as it flows naturally. This is less efficient but a lot more environmentally friendly.

On one of my many trips to the capital Thimphu to get my eye examined, I saw a poster for Earth Hour – an hour celebrated around the world in which people turn off all their lights and electrical appliances. I couldn’t help but say out loud to the poster, “You’ve got to be kidding. It’s Earth Hour in our house at least 5 days a week.” Yes, it is one of the ironies that a country that produces a surplus of electricity has great difficulty keeping it supplied to its own citizens.

Power cuts are very common and we have a ready supply of candles and rechargeable lights to cope with them. Of course when you’re baking bread in an electric oven and the power goes off there’s little you can do except hope that the power comes back on very quickly.

I learnt the hard way that storms can be a problem too. During one recent storm (that actually seemed quite mild) a power surge caused untold damage. The internet to our village was down for nearly 3 weeks; it was only when it came back on again that we realised that the surge had destroyed our modem.

Worse, was the damage to our T.V. We don’t watch much telly in Bhutan but I enjoy watching the news in the morning.  The T.V. broke in the power surge and I went with a friend to Chamkar, the nearest town to get it repaired. There are 2 repairers and neither would even look at it when I told them it was a ‘slim’ T.V.

“We only fix the ‘fat’ T.V.s,” they told me.
I asked my friend to tell them that I don’t think they even make those fat  T.V.s any more, maybe they should update their skills for the ‘new generation’ of T.V.s. – but it was of no avail. They told me to take my T.V. to the capital, they should be able to fix it there. I glanced around one of the repair workshops – fat, old, dusty T.V.s covered every surface.

“How much for one of those T.V.s?” I asked – thinking that this might solve my problem.
“Fifteen thousand Nultrum,” came the reply. I couldn’t help but laugh out loud – that is an entire month’s salary for a teacher. I was so annoyed that I told him that in Australia people leave T.V.s like that beside the road. It was a bit of an arrogant western thing to say but hey – I was upset.

So instead I took my broken telly on the bus and found a repair shop in Thimphu. The shop owner did at least say he might be able to fix it for 7000 Nultrum (only 2 weeks wages – bargain!). But 3 weeks and several phone calls later, my T.V. sits unrepaired wondering if it will ever show the news again.

Instead of a photo of my T.V. I thought these photos would be a little more interesting. Lois loves to carry her babies on her back just like the Bhutanese mummies! 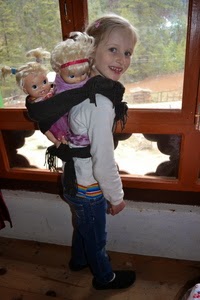 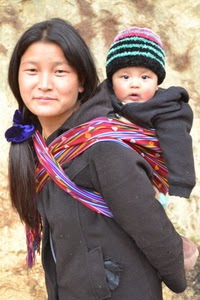