As usual, this is long overdue. Well it’s been quite an interesting few weeks. We left the very pleasant temperatures of Bangkok in January and boarded our Druk Air flight to Paro, Bhutan (near the capital Thimphu).  There were several  other volunteer teachers at the airport and everyone was very friendly despite the earliness of the hour. Having successfully made it to the airport by 5am the next big worry was getting onboard with all our bags. Needless to say there was quite a bit of excess baggage and we were doing all our usual tricks, wearing our heaviest clothes, several layers each etc. We’d been told that Druk Air were quite strict because the planes are quite small but to our amazement we got onboard without any hassles.

Most airports tend to look quite similar but when you land at Paro and see the strange and beautiful architecture, set amidst stunning mountains, you know you’re somewhere quite different. The next thing that catches your attention is the clothing the locals wear. National dress isn’t something that is worn by a few locals on high days and holidays, it is part of everyday wear, the male attire is called a ‘gho’ and the ladies wear a ‘kira’. They look great but they aren’t something the uninitiated can just put on, in fact even locals often require a friend to help them put them on properly.

As a teacher, I can choose whether or not I want to wear the gho at school. Considering school starts at 8.15am, I think I’ll be sticking with shirt and trousers for the time-being as I don’t think I’ll have time for much faffing around in the morning. 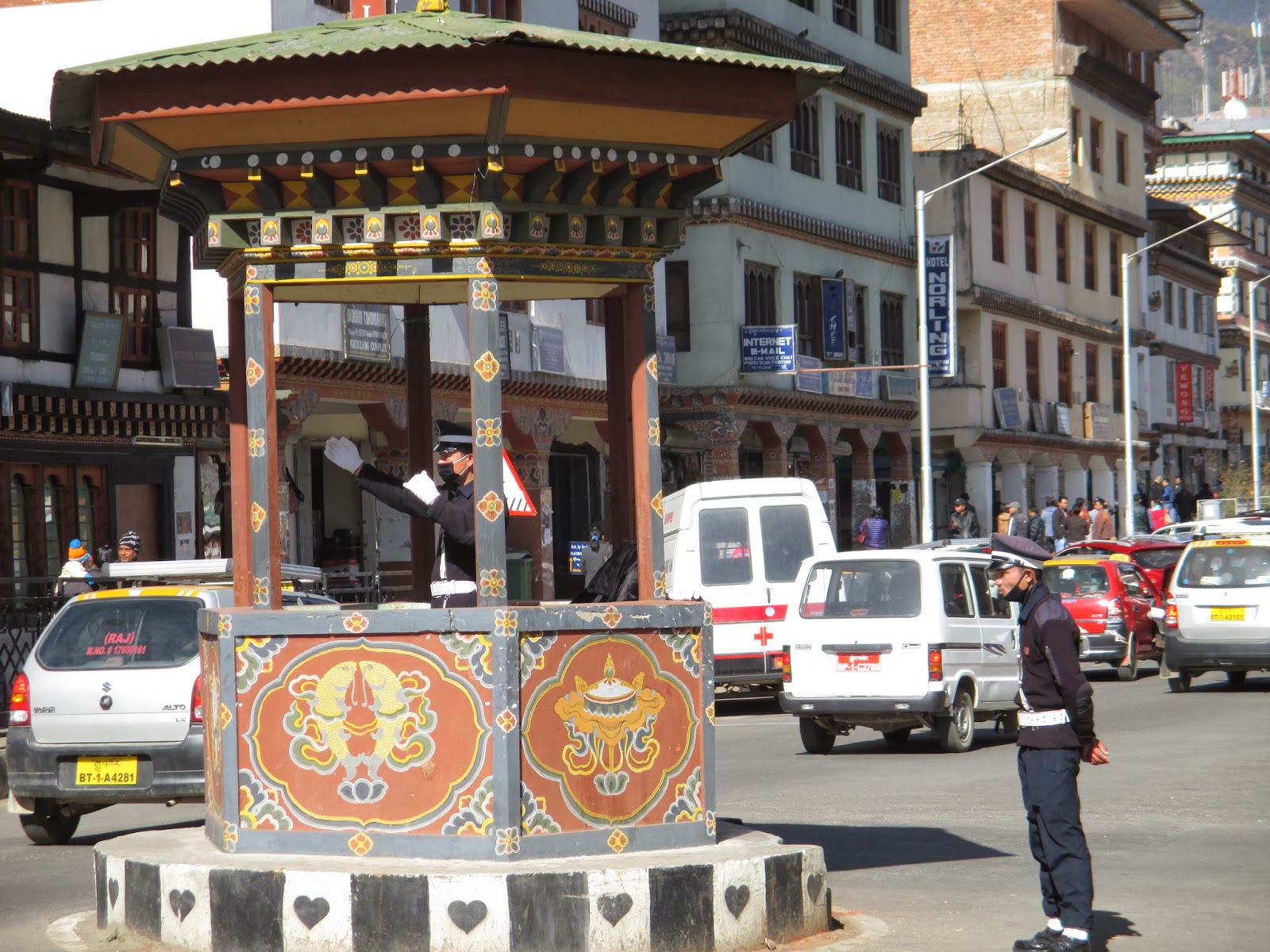 Thimphu is an interesting capital city. There are no traffic lights – apparently they were installed at one main intersection but nobody liked them so the old traffic policeman was brought back. Another thing you don’t see are any chain stores whatsoever - needless to say there are no McDonalds or KFC. It’s a bit of a rabbit warren of a place with lots of narrow alleys and small shops that are impossible to judge from the outside. Needless to say, shopping can be quite time consuming – there is no one-stop-shop and it is easy to fill your days shopping around for supplies. Our merry band of volunteer teachers were based in Thimphu for 2 weeks for a combination of training, shopping and acclimatisation. At 2500 metres, we aren’t that high but you soon notice that the air is ‘thinner’ when you walk up 3 flights of stairs to your room and find yourself gasping for breath. 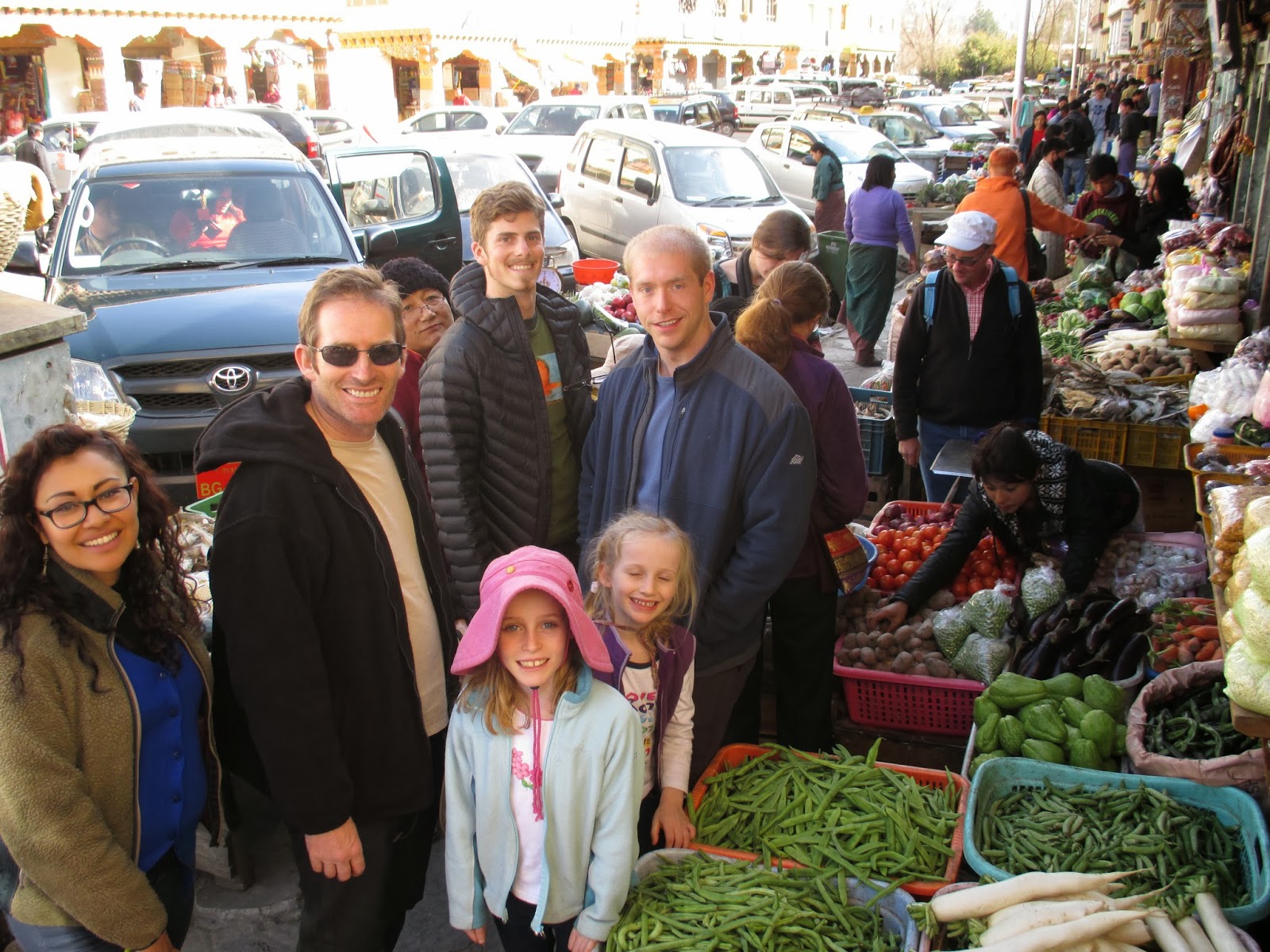 We were all to be sent to different corners of Bhutan with varying degrees of Western comforts. Basically, we needed to get most of our supplies in Thimphu or risk arriving at a location where they simply wouldn’t have them.
As the only ones who had travelled to Bhutan with kids it was no surprise that we bought more stuff than anyone else. We were the only ones to buy a washing machine and a vacuum cleaner but we couldn’t imagine having to do all our washing by hand. The vacuum cleaner was bought mainly because we are hoping to avoid the scourge of fleas/bed bugs in the warmer months. This was a huge issue for the volunteer teacher who was at our house last year and she said she simply couldn’t get a good night’s sleep because of the problem. 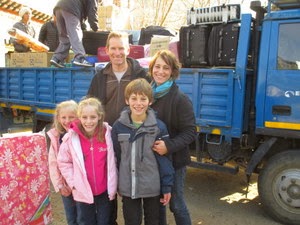 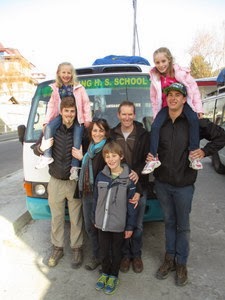 Our fellow volunteer teachers are a great bunch and our kids quickly grew very attached to them. It was a great opportunity for Mum and Dad to off-load the kids onto a willing team of nannies. 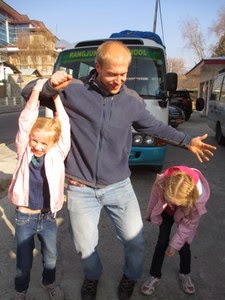 After 2 weeks at our hotel in Thimphu, it was time for our convoy of buses and goods vehicles to head east on the long and winding road across Bhutan. There are very few roads and they tend to be narrow and skirt around mountains. There are no tunnels, and vehicles rarely exceed 60kph. Everyone was in great spirits, excited to finally be heading off to our various destinations. It was only once the first teacher (Jessica) was dropped off that the reality started to hit us. We were being dropped off into a strange and (at least initially) lonely place. The general mood soon became more serious as one-by-one teachers got off the bus. 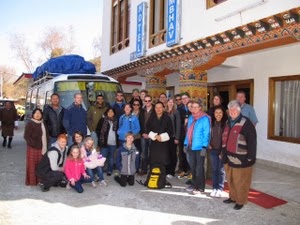 I really admire the adventurous spirit of my fellow teachers. I am so glad that I am here with Justine and the children, I couldn’t imagine being here on my own. Our house in Chumey, Bumthang is very pleasant. We have a Western style toilet, shower and hot water on tap. It is however extremely cold. Be bought a bukhari (wood fired heater) which heats one room but the rest of the rooms are very cold. As I write, our bedroom is 10deg C and it will probably drop a couple of degrees overnight.
We had about an inch of snow last night which made everything look beautiful. Our kids had seen snow before but they’d never seen it fall. They were very excited and quickly ran off after breakfast to make a snowman. 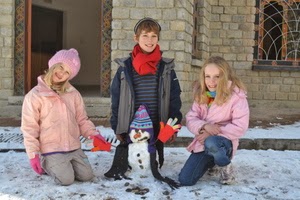 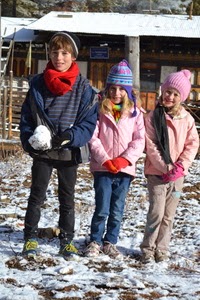 I haven’t actually started teaching yet. Last week was entirely spent in meetings, much of the meetings are in the national language Dzongkha and so it can be hard to understand what is going on at times, but the Principal and some of the other teachers are very helpful in explaining the gist of most discussions. Today was going to be the first day in which the students attended, but because of the first snow of the season, it was declared a holiday. I’m told that normal lessons won’t really get going for several more days due to general organisation issues and preparations for the King’s birthday. I must admit to being a little confused about what I should be doing right now but the other teachers seem very relaxed and so I’m not going to stress about it.

The school in which I am placed goes from kindergarten to year 10. The principal is responsible for all of these grades and there is no formal separation between primary and secondary school. A friendly and helpful colleague Mr Tandin told me that he taught Yr 9 last year and this year he will teach PP (kindergarten). I can only marvel and think – rather him than me! Mr Tandin has been very kind and helpful and took the Divers into Chamkar (the main town of Bumthang). I told him that I was having trouble finding a can opener in town and sure enough we enquired at a few more shops without success. How do they open cans in Bumthang?